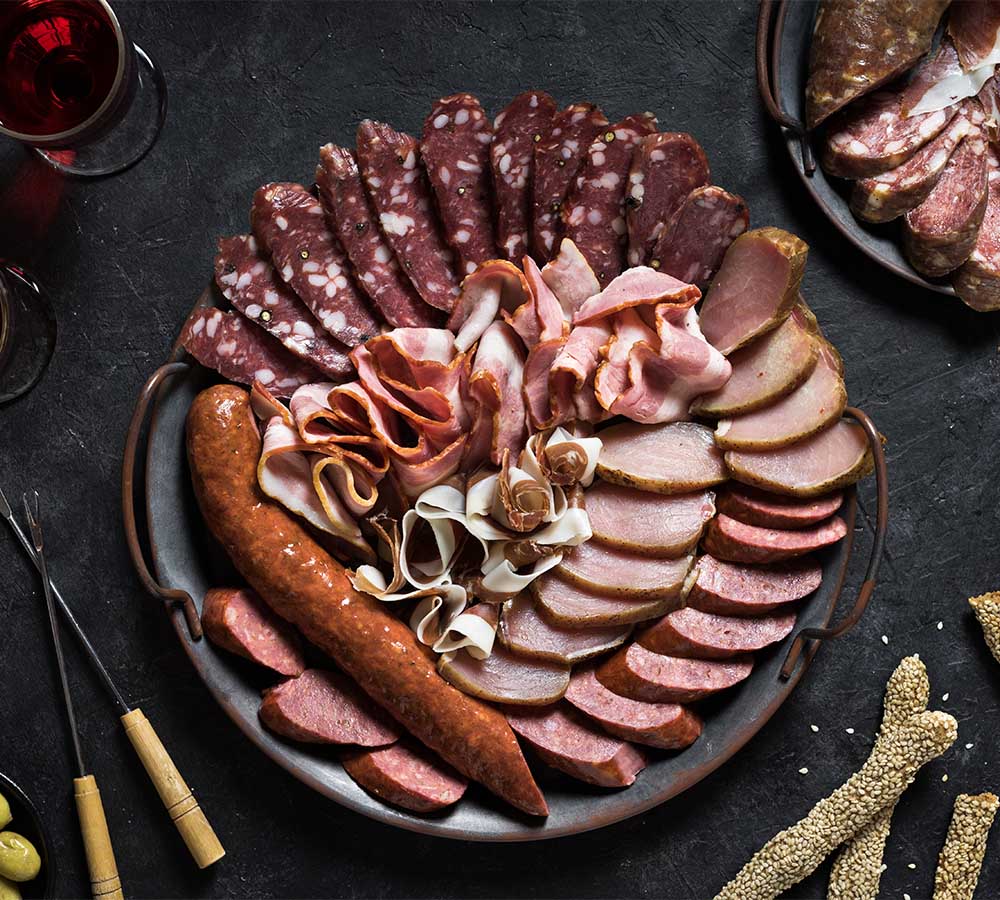 When on January 9, 1387, under a golden bull, the Serenissima Republic of Venice gave its approval to the request of the five proxies of the Municipality of Corfu before the Doge Antonio Menier to annex Corfu, an era began that left its indelible mark on the character, culture and life of the island. In the 411 years, 11 months and 11 days that the Venetian rule lasted, fortresses, houses, theaters and marinas were built, the island’s olive grove was planted, the people of Corfu learned Italian and the ‘dolce far niente’ [the sweetness of laziness], they fell in love with music and theater, they escaped the Turkish occupation and they learned how to cook.

Corfu cuisine bears a heavy Venetian imprint, with the aromas of Eastern spices, cinnamon, cloves, nutmeg and cumin, wine in the glass and in the pot, sugar in cooking, and all the new arrivals from the other side of the Atlantic: tomatoes, potatoes, peppers, coffee and chocolate.

And of course, in charcuterie. Noumboulo Fumicado, Corfu’s most famous cured meat with its smoky, peppery and aromatic flavor is the epitome of the Venetian influence on Corfu’s culinary heritage. Cut into paper-thin slices on fresh bread, it is an ideal appetizer for ouzo, it is suitable for green salads, but also for cooking, with risotto and pasta. Valuable information on the history and the production method can be found in Ninetta H. Laskari’s wonderful book “Corfu, A look through time, 1204-1864” The production of Corfu Noumboulo started from the time of the Venetian Rule on the island (1401-1797). In the idiomatic dialect of Venice “Taglio di Nombolo” is the name for the calf’s rump (probably, originally this type of meat was used for the preparation of noumboulo). “All charcuterie meat was made by the artisans of ’scola’ – the butchers’ guild – and was sold retail or wholesale.” Subsequently, she cites the production method traditionally applied for Noumboulo, specifying the type of meat, the proportions of meat and fat, the seasoning and the use of wine in the marination, the type of casing used, but also the wide variety of Corfu aromatic wood and herbs used for smoking “sage, dry fennel, gorse, bay leaves, myrtle, dry mullein, … dry oregano, almond shells”, but also meat: “A whole pork loin, if it is not too thin. Otherwise, the entire meat cut left after removing the bones from the steaks.”.

Noumboulo, therefore, is a matured product of pork steak or fillet, marinated with local herbs and placed in an animal intestine casing that has first been immersed in red wine from the local Petrokorithos variety. It is also smoked with aromatic local plants such as fennel and gorse and rubbed on the outside with black pepper. Its taste is rich with a characteristic smoked aroma, slightly sweet, without being salty.

There are many historical references to Noumboulo. We cite two of the most important:

a) by the jurist and scholar Frederikos Alvanas (1827-1903), who in his 1894 book “On the titles of nobility in Corfu and about the fiefs”, mentions that the farmers of the island were obliged by contract to offer the landowners donations (regalia) which “consisted of hens, noumboulo’s (a type of charcuterie) eggs, lambs, goats, pies and the like”.

b) by the distinguished economist Andreas Andreadis (1876-1935), who in his two-volume book “On the Economic Administration of the Ionian Islands under the Venetian Rule” of 1914 also mentions these contributions (the gifts to the landowners, that is) which according to the Ionian Law of May 11, 1825 “they call ‘syngratia’ or ‘caniskion”, include “Noumboulo (a type of charcuterie)”

Ninetta Laskari mentions that the noumboulo of the village of Agios Markos was famous, the inhabitants of which traded in the city of Corfu, maintaining an outdoor sales area in the island’s port. There they offered for sale in straw baskets their noumboulo’s, on fig leaves, decorated with flowers and willow branches.

Two Germans fighting in a foreign territory (Italy), a battlefield strewn with gloriously fallen horses and plenty of barrels of wine, herbs and spices. All this marked the birth of Pastitsada, in Verona, the city that also gave birth to Romeo and Juliet …

A Story of Circles